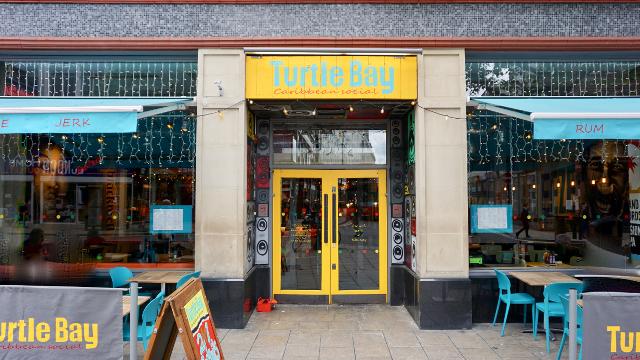 Turtle Bay Restaurant in Croydon boasts a taste of Caribbean culture. From rum based 2-4-1 cocktails (which is a MUST to try) to jerk chicken and Jamaican patties as well as the option of going vegan, there’s always something for everyone. In this post, I’m going to write about the overall experience I had after working a sweat from a two hour shopping spree. I needed something to fill me up. I’ll run through a breakdown of the location, the atmosphere, the service, the food, the price and the conclusion below.

Turtle Bay Restaurant is close to George Street tram stop. It is literally at the south end of the High Street. Click here for their website. Get on the tram going towards Wimbledon, New Addington, Beckenham Junction or Elmers End. Get off at George Street tram stop, walk up and turn left, you can’t miss it. It’s next to many other pubs, bars and restaurants nearby.

First impression of Turtle Bay was good. I felt like I was in the Caribbean. It was also colourful. There were greens, yellows, and reds, something that you’d find, well, in the Caribbean. As soon as I entered, a server greeted me and gave me a menu.

There are two parts; the front area is the bar area. If you want to order food from the bar, there would be no table service, you’d have to go up to the bar to order. The back part of the restaurant is the proper restaurant and you do get table service. The kitchen is right at the back and you can see the chefs cooking for us.

The bar in the middle of the restaurant is shaped into a hexagon. I felt as if I was in the Caribbean beach sipping cocktails on a summer’s day, sitting on a deck chair on a sandy beach with its bar nearby somewhere. I imagine sipping on coconut drinks too, unfortunately, there’s none in this restaurant, although coconut-based drinks are available such as rum. Unfortunately, I’m in Croydon lol.

Raggae music plays in the background, the walls had pictures of Caribbean men and women with their afros including The Twinkle Brothers. I didn’t see a picture of Bob Marley though but love the “One Love” graffiti on the wall. On the extra side, in the bar area, you can take advantage of plug sockets so you can charge your phone and laptop. I also love the stereo stuck on the walls, its colours had yellow, reds and greens. It screams out the infamous Caribbean stereos.

It was a bit quiet when I came at three in the afternoon but I assume it gets busier in the evening. I’ve never eaten here in the evening though so can’t really say.

The barman served me strawberry daiquiri and I knew it was 2 4 1 cocktail so I got one for free. I wasn’t really expecting it but he gave it to me anyway. The daiquiri tasted how it should taste. I heard Turtle Bay has a good reputation for cocktails here day and night.

I didn’t have to wait long for my food and ordered jerk chicken breast served with jerk gravy, a side of coleslaw and a slice of watermelon to soothe my spicy taste bud. Since I like spicy food, the spice wasn’t that bad but each to their own. The jerk chicken breast doesn’t come with sides. Chips (fries) were charged separately.

The waitress served me my meal with a bottle of a few jerk BBQ sauce, Bajan pepper sauce, cutlery with steak knife and salt. I was very happy with the service

By looking at the menu, Turtle Bay is vegan, vegetarian and gluten-free friendly. Since having worked in hospitality, I would have appreciated them asking me whether I had any food allergies. The quantity of the chicken breast was small, I thought it wouldn’t fill me up but it did. Thank goodness I ordered a side of fries. The jerk chicken breast had barbecue sauce on top, it was supposed to be spicy but did not taste spicy at all. I guess that’s why they gave me a bottle of pepper sauce on the side just in case the spice was too much for me if they put it on top.

Jerk chicken should be marinated overnight. The marinade and sauce flavours should penetrate the meat but they didn’t do that. (I don’t think they did). I remember it tasting salty and sour at the same time. It did taste nice though I have to admit. It’s a shame I didn’t taste the pepper sauce to review since my fries had peri powder on it already. It would have been too spicy for me anyway. The price was £7.80 for the chicken breast with a side of chips for £3. On a side note, just two sides would cost £5.50, three sides would cost £8, four sides would cost £10 and five sides for £12. I didn’t like the coleslaw as it tasted off.

As I had a strawberry daiquiri, the taste was really sweet. The cocktail is served in a martini glass and you can either have it blended (without shaking) or shaken, the traditional way. I liked it the traditional way. The ingredient uses Havana Especial Rum mixed with strawberry, served frozen or straight up just for £7.95.

Aside from alcoholic beverages, they do mocktails, soft drinks, and other rum-based drinks here, not to mention ciders, beers, and wines.

The price is a standard price for a restaurant and in Croydon, they are competing with Central London prices. It’s not cheap but that’s more or less the same everywhere. If you do want to visit Turtle Bay, make use of the 2 4 1 cocktail as they are known for their cocktail making. They used a lot of rum-based ingredients too.

For a restaurant, it is standard price. Like I said, it’s quite expensive compared to meals in most European cities but if you want to have a spicy chicken meal on a budget, go to Rio’s Piri Piri and get a  Grande Spicy Chicken meal or spicy chicken wings. They’d ask you how spicy you’d like the chicken. Since I go there regularly, they know I like it moderate, so let them know. A grande chicken burger, peri fries, and a coke would cost you £6.50. Bargain.

I wouldn’t say Turtle Bay is authentic in terms of its meals but I would recommend their cocktails. They’re the best. Turtle Bay did fill me up for lunch but only for a short while. I didn’t feel full enough to be bloated because I like to relax and digest my food after I eat. That way, I won’t have to spend my money on food or cook again later on. I had my meal at 3 pm and by 5:30 pm, I felt I wanted to eat again.

So there you have it, in my opinion, I would recommend the atmosphere and the 2 4 1 cocktails here. Not too keen on anything else as I’ve tasted and visited better Caribbean restaurants in London.

Basil and Grape, Croydon
The Ultimate Guide to the Croydon in Surrey
5 Incredible Fast Food Restaurants to try in Croydon, Surrey