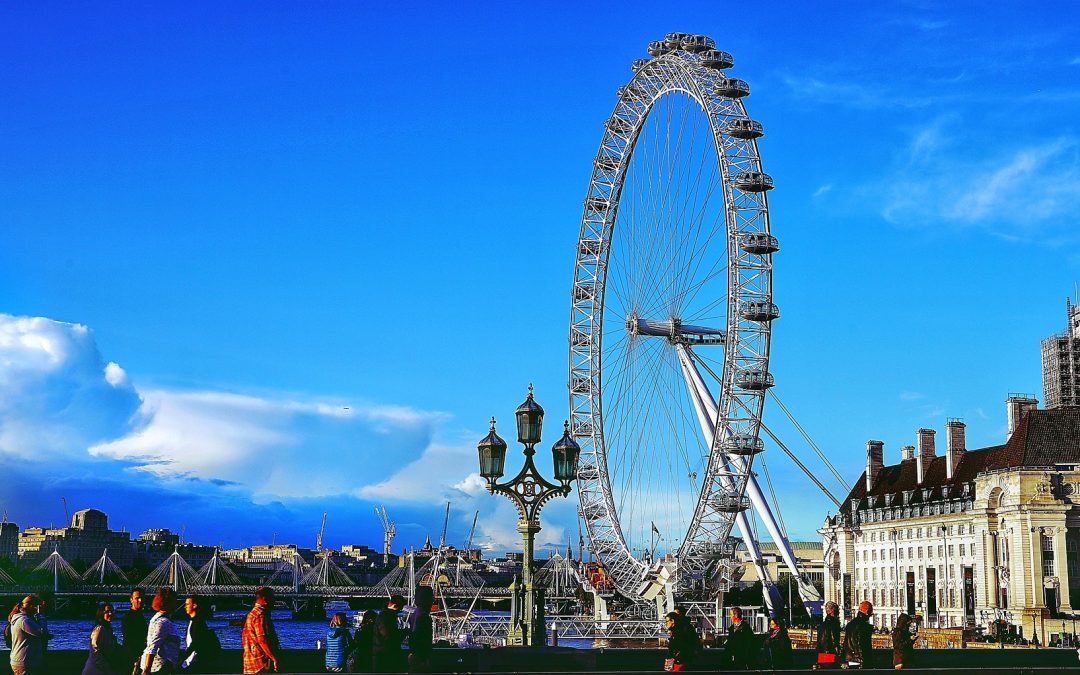 The breeze of the cold fresh air in winter, the heat from the Sun hitting my face, the green trees in Summer, the naked leafless trees in Winter, the hissing sound of the waves in the River Thames, the view of London from the London Eye, screaming and laughing children playing in the playground, the blaring sound of live music outdoors. These are what I look forward to when I visit Southbank. Compared to the rest of Europe, Southbank is the best attraction for social gatherings. There’s no better time to walk in the Southbank, it’s beautiful night and day, all seasons, hot or cold.

Introduction to the Southbank Walk

Ahh, the Southbank walk. As I stepped out of Westminster tube station, I noticed a lot of people walking up and down, getting to their destination. One of your London walks should include walking by the strip of the River Thames.

I also noticed a tall glassed building in the middle of the roundabout. Here stood the IMAX theatre where you can also watch the latest 3D films. Today, I’m not going there, I’m heading towards the Southbank where I wanted to enjoy walking through the strip.

What I love about Southbank is that myself included, people love what I call the Southbank walk, walking by the strips of the River Thames.

There’s so many major attractions, bars, restaurants, cafes, British pubs nearby that it would have to take two days in order for you to enjoy the environment.

When I went back to the Southbank on another day, after visiting all the major family attractions such as Sealife, The London Eye and The London Dungeons, I hung around the front and outer section of  Southbank Centre.

Southbank London is very safe. You shouldn’t have to worry about pickpocketing like Oxford Street. Although it can get busy in Southbank, a lot of pickpocketers hang around in Oxford Street and Regent Street since they know there are more tourists around those areas. You shouldn’t worry about walking around in Southbank at night either but stay by the River Thames. Southbank is beautiful at night and can be peaceful. Don’t walk through small dark alleyways between apartments and office buildings. It’s easy to get lost as well.

The Southbank Centre is a few walks away from The London Eye. It hosts a variety of events such as theatres, festivals including jazz, contemporary modern music, Broadway musicals, poetry and many more. There are various food outlets including Eat, Giraffe and Yo Sushi, not to mention others.

The Southbank Centre overlooks the River Thames and at the moment, the weather was getting a little bit windy at around 3 o’clock but there were still plenty of people walking and socializing.

During spring and summer, you can find many children walking through the water fountain shooting upwards, getting wet. For the adults, usually, there willl be loud music blaring outside, stalls selling alcoholic and non alcoholic beverages as well as hot dogs and burgers overlooking the River Thames.

I found out that The Southbank Centre has a roof garden and a cafe too which you can take advantage of. Although I’ve been to the Centre plenty of times in Summer, I have never seen any shows that were on.

I suggest you guys go in summer where there’d be music playing, including live music and drink stalls available by the balcony. Imagine gulping beer on a summer’s day, overlooking the River Thames.

Next to the Centre, there were a few upmarket restaurants too. Check out The Southbank Centre website for more details of what’s happening.

Since the Corona virus, the Southbank Centre is closed to protects their staff and their customers, but check out their virtual online entertainment such as podcasts, interviews, festivals that had been happening in the past and many more.

If you would like to make a donation, please feel free to do so on their website. The Southbank Centre still wants to keep art and culture going so that in the future, after the pandemic, everyone can still enjoy what’s on at the Centre.

As I walk further up the Southbank strip, I found something similar to the Southbank Centre is The Underbelly Festival. This pop-up festival brings you world class entertainment in the heart of London. I did see a circus show once here with a few friends. It was quite a good show.

There’s usually a lot of young people visiting the Underbelly Festival. The circus was a few years back though. The Underbelly Festival finds people socialising and eating outside by the benches enjoying theatre shows, festivals and other performing arts. It does get busy too so check out the environment and what’s on on their website.

As I walked on, I saw a few skater boys on their skates falling over by accident and on purpose under the Centre’s balcony. All around them were several skaters’ ramps with different shapes and sizes, colourful graffiti drawn all over the walls and pillars.

People watched as they skated. This is a free area for all skater fans, you don’t have to pay to skate here. I saw a few people watching as they skated from left to right.

On the opposite side from where the skaters were, I found three fenced squared patios where people ate and socialised on the benches, canopies shading the tables. I think that’s a relaxing area for family and friends to enjoy overlooking the Thames.

As I walked under a bridge, there was a book stall selling different types of books from old to classics to new to poetry to fiction, you name it, it’s there. It’s vintage and second hand and it will always be there so check that out.

Another notable place worth seeing is the National Theatre. Here, you can watch world-class productions.

They travel around the world, including the West End putting on great shows. If you do have spare time in London, watch a show here and check out their website.

Compared to the West End shows in Shaftesbury Avenue, the National Theatre is publicly funded alongside the Royal Shakespeare Company and Royal Opera House.

In the past, it has shown plays from Shakespeare, classic drama, new plays by conteporary artists and many more. Since I didn’t have time that day to watch any shows, I had to move on. Maybe next time, I’d write a review on a show that would interest me. I do like theatre shows though.

Along the path from The National Theatre, there were several deckchairs facing the theatre as well as an site bar where you can taste the finest beer, champagne, and cocktails. I’ve never been though but the atmosphere looked tempting to check out.

Check out Gabriel’s Wharf where you can eat, play and socialise. Here, I found that some of the independent shops were closed and some were open. It was quite colourful and I liked the benches and large patio in the middle. Since it was already around 6 in the afternoon, most shops would be closed. I saw a lot of business people finishing their day at the office. Now would be coming up to rush hour.

Aside from The National Theatre, if you are a fan of Shakespeare, check out The Globe Theatre where they play major Shakespeare plays for just £5. If you want to tour around theatre, feel free to do so.

Check out The Tate Gallery too, it’s free. (There are two Tates that can be found in London comprising on different artefact and treasures, Tate Britain and Tate Modern. Other Tates can be found in St. Ives and Liverpool).

I was fortunate enough to go on the The Globe Theatre tour where we were able to find out the history of the theatre. If you walk across The Millennium Bridge outside Tate Modern, you will end up in Fleet Street where you can ake advantage of St. Paul’s Cathedral.

Check out my post on 14 Things to do in Southbank here where you will read about my time at the Shakespeare’s Globe.

I headed towards Clink Street heading towards The Clink Prison and Museum, then after, walked through a narrow walkway. More information on the Clink Museum and The Golden Hinde on my 14 Things to do in Southbank above. It was already closed when I got there.

This ship travelled around the world for expeditions and voyages with its owner. it was already closed so I took several pictures in front of the ship for memories.

There are plenty of famous attractions such as The London Eye, The Shrek Experience, The London Dungeons, and SeaLife and it’s just a short walk away from Big Ben and Westminster Abbey. Further along, you can see glimpses of St. Paul’s Cathedral and The Shard.

Along the bank, there were rows of big oak trees, rows of benches overlooking the River. Everywhere you look there were enough bars, restaurants and shops to choose from. At around 6 in the evening, people were still talking, walking, jogging and taking their dogs for a walk. Behind me, I could here two Spanish speaking people talking and a Japanese girl walking towards me. It showed me that Southbank is very multicultural.

Would I visit Southbank again?

I would visit The Southbank again because there’s a lot to do here. One day I’d fancy going to a bar near the Southbank Centre, one day, I’d eat in Borough Market and another time, I’d eat in a traditional English pub overlooking the Thames and St. Paul’s Cathedral. I don’t think anyone would get fed up being here.

During my walk in the Southbank, I realised Southbank is bigger than I thought. Spend at least 1 hour for each attraction if you want to go inside and two days spending time walking around Southbank. Heck, it took me two days to complete this post even though I only spent one day here.

When I went to Madame Tussauds, I had to walk back to Westminster Station, wasted my foot journey to the station, on the tube and out to Baker Street and come back to Southbank again, my mistake. Better stay in the Southbank and visit Madame Tussauds another day.

Start your walk from London Bridge

Alternatively, start your Southbank walk from London Bridge Station, go through Borough Market, have a look around here, maybe grab a bite to eat before your day, check out The Golden Hinde, £5 for entry and The Clink Prison for £7.50.

Walk your way up visiting Tate Modern for free. Spend no more than 2 hours here. Take the Shakespeare’s Globe tour for £17.50. After this, walk along the bank where you’ll see rows and rows of bars, restaurants, and shops along the river.

As suggested before, once you get to Westminster Bridge at the end, there are several family attractions here. Spare 1 hour for each attraction and if you have more free time, it could be spent visiting The London Eye, The London Dungeons, SeaLife and The Shrek Experience.

The London Eye took us half an hour to go round, The London Dungeons to us 1 hour to visit, SeaLife took us around 45 minutes and Madame Tussauds took us 1 hour to complete.

The Golden Hinde opens at 10 in the morning everyday and you can book private events here. The Clink Prison Museum opens at 10 in the morning throughout the year. From July to September, it closes at 7:30pm. From October to June, it closes at 6pm and 7:30pm on the weekends. Spend and plan your time well and have two days to spare to visit Southbank.

So there you have it, the Southbank Walk at your fingertips. Take care!!!