8 Old Streets in London you MUST visit

How to make the most of visiting old streets in London

Introduction to the old streets in London

There are some places in London that can be overlooked because people visit famous landmarks like Buckingham Palace, the London Eye, and the various hidden gems scattered around London. People forget that we have old streets in London too, and you’ll be walking past it not knowing its history. But what people don’t realise is that London has been known as one of the oldest cities in Europe dating back to Roman times until the Anglo-Saxons overtook power. Now, London has developed into a thriving city with lots of medieval and 21st Century buildings scattered together. Without further ado, below is a list of old London street names you must visit.

History of London and the Romans

Before we get to the list of old streets in London, it’s important to know how the old streets developed into the modern streets we see today. Historically, London has been attacked by many invaders including the Vikings and the Romans. Since the 3rd and the 4th Century, Londinium, a name given by the Romans thrived since AD 43 under Emperor Claudius’ control. Very much of the south east was controlled by the Romans, and they built bridges connecting land to the south.

Since AD 60, traders started to flourish, but during the Iron Age, the Iceni tribe occupied Norfolk and Suffolk under the rule of Queen Boudicca. They set fire to the city, but the Romans built a Roman basilica where Leadenhall Market is placed currently. In addition, the Romans also built an ampitheatre as well as Cripplegate Fort during the 1st Century, which the city flourished until the 2nd Century. The Romans did have its ups and downs when controlling London, but London wouldn’t be what it is today if it wasn’t for the Romans. I could go on and on about the Romans and London history, but what links to old streets in London is related to how the Romans ruled the city, and you can see some Roman ruins in and around London, if you know where to find it.

Cloth Fair is the oldest street in London. Merchants used to go through this narrow and medieval street to buy and sell materials in Bartholomew Fair, a summer fair held during the 12th to 19th Century focusing on cloths, hence the name Cloth Fair. Nearby streets include Long Lane, Middle Street, and the Anglican church St. Bartholomew the Great. Check out the oldest dwelling on number 41 – 42. Number 40 was a shop Mitchell, Inman and Co, a cloth specialist opened during the 19th Century. The street is small, narrow, and only a few people pass through this street, but the most important thing about this street is its history and relation to the Cloth Fair.

Haymarket is a road that links to Piccadilly Circus and Pall Mall. Historically, Haymarket was a street market that sold farm products such as hay, straw and fodder during the 17th Century and was more rural than the present-day Haymarket. The nearest village was Charing, which we call Charing Cross now, and what’s so special about Haymarket is its West End theatre district. You have the Her Majesty’s Theatre built by architect Charles J. Phipps in 1897, and Theatre Royal built by John Nash hosting musical productions throughout the year. We also have The Lyceum Theatre showing the long running The Lion King Musical. If you want to find out more about the West End, then check out my West End walk for inspiration. 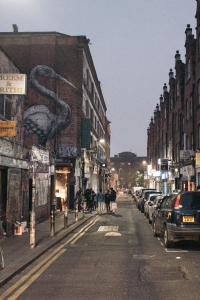 The present-day Brick Lane is the home of the Bengali community and it’s one of the famous streets in London. It’s situated in the neighbourhood of Shoreditch and adjacent to Spitafields Market. There are many trendy bars and clubs for the  young fashionable. It’s famous for its curry houses, so if you have a soft spot for curry, then visit Brick Lane. Previously, during the 15th to the 18th Century, Brick Lane was called Whitechapel Lane, but changed its name to Brick Lane because people built bricked and tiled buildings around this area. Throughout the years, demand for bricks began to flourish, making the name Brick Lane a brand. You can also find street food, fruit and vegetables stalls, and bargains, as well as street art and graffiti in and around around the area.

Fleet Street was a street the Romans built in 200AD. In Ludgate, they found a Roman amphitheatre that was built above Fleet Prison; however, other reports suggests the area was too muddy for the Romans to build their settlements there. A water pipe was made in Fleet Street, and when Anne Boleyn married King Henry VIII, it was rumoured that the water flowing through the pipe was in fact wine. Brothels, tanning of the animals’ skin to make fabric, and taverns were built here during the 14th Century, and by the 16th Century, Fleet Street was overcrowded with people, but the construction of buildings continued despite the ban of building further properties.

Later in 1675, St. Paul’s Cathedral was built in the area. It’s still standing proud and tall to this day. Along with St. Paul’s Cathedral, Fleet Street still has its 19th Century buildings standing with full of retail shops, restaurants, and cafes. It also links to the South Bank area, located by the River Thames where all the major attractions are. Check out 31 things to do in Southbank London for inspiration.

Alderman’s Walk is a small alleyway situated near Liverpool Street station. Alderman’s Walk dates to the 17th Century and has many stories to tell. Sir Frances Dashwood was a member of the Common Council of the City, and his gardens and house was connected to Alderman’s Walk. The side of the old, grey, and white patches of the stained stoned walls of St. Botolph-without-Bishopsgate church shows that it has been standing there since the 14th Century. The church is situated next to Alderman’s Walk and has a great story to tell.

A Catholic military order, the Knight’s Templar was tried here for corruption, and in 1413, a female hermit lived here on a pension of 40 shillings a year paid by the Sheriff. It is thought that St. Botolph-without-Bishopsgate church is haunted to this day. A photographer apparently caught a ghost of a woman in medieval clothing running around the church. 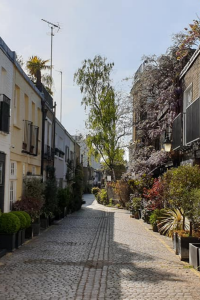 Kynance Mews is an Instagram worthy street, and it also has a great history to tell. Many people know that mews in London were owned by the wealthy who had horses. They would leave the horses in the barn, what is now people’s garages, and the servants would live upstairs. Situated in South Kensington, one of London’s wealthiest areas, Kynance Mews was a place for several movie settings including Star! featuring Julie Andrews, Who Dares Wins, The Black Windmill and The Big Sleep. It’s pretty quiet, so not a lot of people come here, apart from Instagram addicts. Even then, you won’t see many of them.

The great thing about Kynance Mews is that it’s hidden from an extremely busy main road. It felt like Alice opening a door to Wonderland. It’s surrounded by colourful plants and flowers, and sometimes you’ll find red, green, or yellow weeds covering the 19th Century walls in Autumn. The garages and doors are often painted in different colours to make it Instagram worthy.

Lombard Street is one of London’s Roman roads of Londinium, also known as Roman London, a capital of present-day London during the Roman period. Its history dates back to the 13th Century when King Edward I bought a plot of land for goldsmiths. During the 17th Century, Lloyd’s Coffeehouse was introduced in Lombard Street where merchants, sailors, and shipowners would meet to talk about trade, shipping insurance and other maritime subjects. The greatest thing about Lombard Street is that there are many colourful signs of ancient buildings that stood there since as old as time. Between the 17th to the 19th Century, the headquarters of the General Post Office’s, the state postal system in the United Kingdom once stood in Lombard Street.

Cheyne Walk is also another Instagram worthy road. Situated in the Borough of Chelsea and Kensington. Cheyne Walk runs parallel to the River Thames, and you’ll see many 18th Century buildings along the walk. The best thing about Cheyne Walk is its wisteria flowers that have been overgrown property walls, and there are many old buildings such as the Old Church dating back to the 11th Century as well as Carlyle Mansions, a tall, orange-coloured block of flats built in the mid-19th Century. Check out things to do in Chelsea for more inspiration.

I am a part of an affiliate program with Expedia.com, and Tripadvisor. If you book through me with no additional charge to you, I get a commission from them.