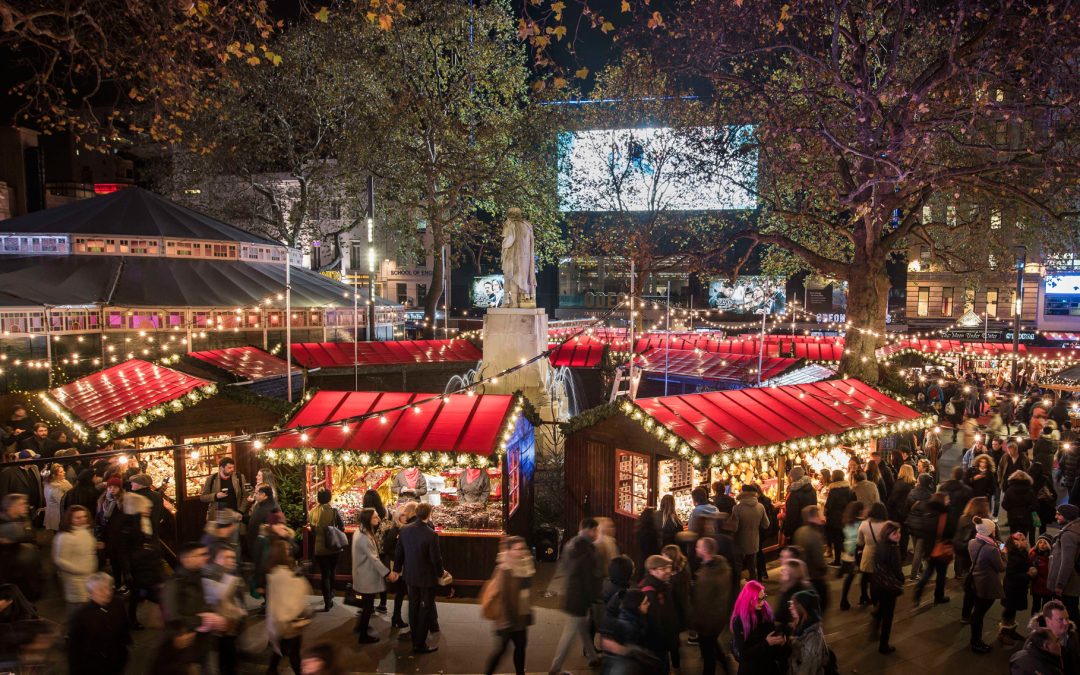 For some people, Christmas is the time to enjoy yourself with your loved ones, getting together and drinking mulled wine and carve turkey at a huge table singing “Tis the season to be jolly”. For some, it’s too stressful to even be shopping for Christmas presents, especially in the hustle and bustle of London. The Christmas markets in London aren’t the ones to take for granted. It’s simple yet festive compared to its European competitors.

Have you ever thought about what it would be like if you weren’t stressed out looking for Christmas presents?

Do you want to find something different from the high street, something you can’t find anywhere else during Christmas?

Well, Leicester Square is the place to be when looking for Christmas gifts. Plus, don’t miss the home of the spectacular La Clique, an acrobatic, circus and cabaret themed show at the heart of Leicester Square. This happens every year so don’t miss it.

Since I went to Southbank Winter Market beforehand, I headed to Leicester Square to compare and contrast the two markets. As I stepped out of the station, the first thing I noticed was the glittering lights at the top of Hippodrome Casino. The place looked and felt brighter than usual. Hippodrome Casino was showing Magic Mike Live and I loved the ticket office for theatre shows next to it. Across the road, take advantage of the half price booth for theatre tickets where they advertised Mary Poppins. I have to review this soon, see what the terms and conditions are. Right now, let’s focus on Christmas in Leicester Square.

Outside the Christmas Market Leicester Square

Christmas shopping in Leicester Square is less stressful than christmas shopping in Regent Street and Oxford Street because, one, the market is right bang in the middle of the square and the square is not that big. Two, there’s a few selection of stalls selling Christmas decorations, handmade gifts and hot and cold food and drink. The same as the Southbank Winter Market minus the Skyride and Carousel.

The thing I love about the Christmas markets here is that all the products would be different from the high street stores. Here, in London, you can tell where people buy their products if you shop on the high street. There are plenty of people that come here though, it’s not like it’s too quiet for people to not enjoy the Christmas market here. They do enjoy it, plus, they get to buy tickets to La Clique show, that’s a plus.

From first impression, the square was closed off by boards so you couldn’t see the market. I assumed, they lock the market when it’s closed. It still looked bright and there were people that still walked here enjoying the atmosphere. All the restaurants had Christmas lights which made the atmosphere brighter, the trees surrounding the square had twinkling lights to show it’s Christmas. Big Smoke Restaurant was also bright with lights, including the Empire Casino. Good first impression. 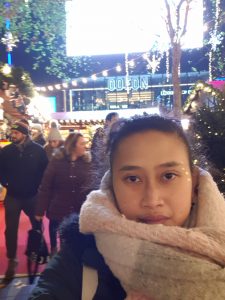 The most exciting bit was when I entered the market in the square. The first thing I noticed was the Christmas tree on my right hand side that said Merry Christmas from Laphroaig whisky. The market was bright with lights, there was a security guard at the entrance but he didn’t check my bag. The entrance is free by the way.

On the far left, there were a few people lining up to watch the La Clique show and in the middle of the square, there were several stalls in circles selling christmas decorations and products. The downside of the products is that they can be quite expensive. Aside from the price, I recommend coming here to buy Christmas gifts, it’s not too stressful and there’s still food and drink stalls behind. The selection is not as big as Southbank Winter Market, but there were enough Christmas gifts to choose from in one stall anyway.

The theme was exactly the same as the Southbank, same lights, same styled stalls, same atmosphere. Christmas in London is very simple but you’d still feel it’s Christmas. My favourite stalls here are the Chech food and drink stall and gourmet burgers, french fries and german sausages next to it. I loved the decoration on the stalls. On the roof of the stall, there was a window that opened up. It looked like it was a roof with an attic. There were three stars hanging by the window. Next to it, there were two Christmas wreaths and lights surrounding the roof. There were plenty of people eating and drinking, lining up to get their share of hot food and drink. These two  stalls were what stood out the most compared to the others.

As I walked along, I saw that you can buy tickets to see Santa at the Santa’s Grotto  for £10. I don’t have any kids but from my friends’ experiences, visiting Santa’s Grotto was a good one. One of my friends said they bundle the kids together, Santa was sitting in front, he asks each child to write their names on a tag and what they would like for Christmas and the kids enjoyed his presence. A lot of my friends who have kids really enjoyed it but, hey, each to their own.

Outside the Christmas Market Leicester Square 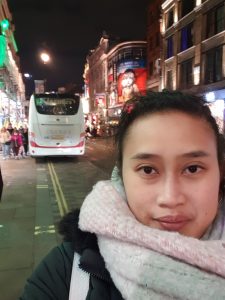 As I walked out of the market, as usual, there’s street performers outside the square. In my opinion, the performers aren’t really good but people still watched and take photos. I headed towards Chinatown since Chinatown is still in the Leicester Square area.

Chinatown was busy. I could hear buskers and red chinese lanterns at the top of the buildings strewn above our heads like every other day. However, it didn’t feel very festive to me. This shows me that Chinatown is like any other day during Christmas. I headed over to Shaftesbury Avenue, the theatre district, I could see the Les Miserables poster hanging at the top of the theatre where it’s showing. I didn’t see any Christmas lights though, it looked like it was a normal day until I reached Piccadilly Circus. Maybe the lights will come on in the middle of December. It was too early.

On the internet, it said that the Christmas market in Leicester Square was the best one in London but, in my opinion, it’s the Southbank Winter Market, since there’s more going on there. There are fair rides and more stalls and a good selection of Christmas products and food and drinks there. There’s also more in Southbank for the family like Circus 1903 compared to Leicester Square, apart from Santa’s Grotto.

I generally love the lights all around the square and the buildings. The stalls also had lights around their roofs, it made it more festive but I wouldn’t say it’s the best Christmas market in London. It may be that the Le Clique event makes up for the market but I don’t know. I haven’t had a chance to see what it’s like. One day, I will see this event and make a review of it.

Overall, it’s simple but festive. It’s not over the top but bright, there were lights everywhere. The downside to it was that most of the products, food and drinks were quite expensive but that’s normal if you go to a city like London. Everything’s expensive, especially during Christmas.

It would have been nice if Chinatown and Shaftesbury Avenue were decorated with Christmas lights or have a tree or two. Since I went to London early in December, maybe the lights weren’t on yet but, still, there should have been Christmas lights and trees around here since this is still the Leicester Square area. Leicester Square is not the best Christmas Market in my opinion, it’s Southbank Winter Market.

The Christmas Market in Trafalgar Square is next to Charing Cross Station looked dark, all I could see were three stalls illuminating from far away. The only thing that was spectacular was the tall Christmas tree standing in the middle of the square. There were a few people gathered there too. It didn’t look exciting so I didn’t bother.

So, there you go, the Christmas market in Leicester Square brings people together. It’s festive but simple and people do still enjoy being there, whether it be the atmosphere or the decorations and lights. Go back here for my “Places to visit in London in December” post.