A Guide to Changing of the Guards Horse Guard Parade 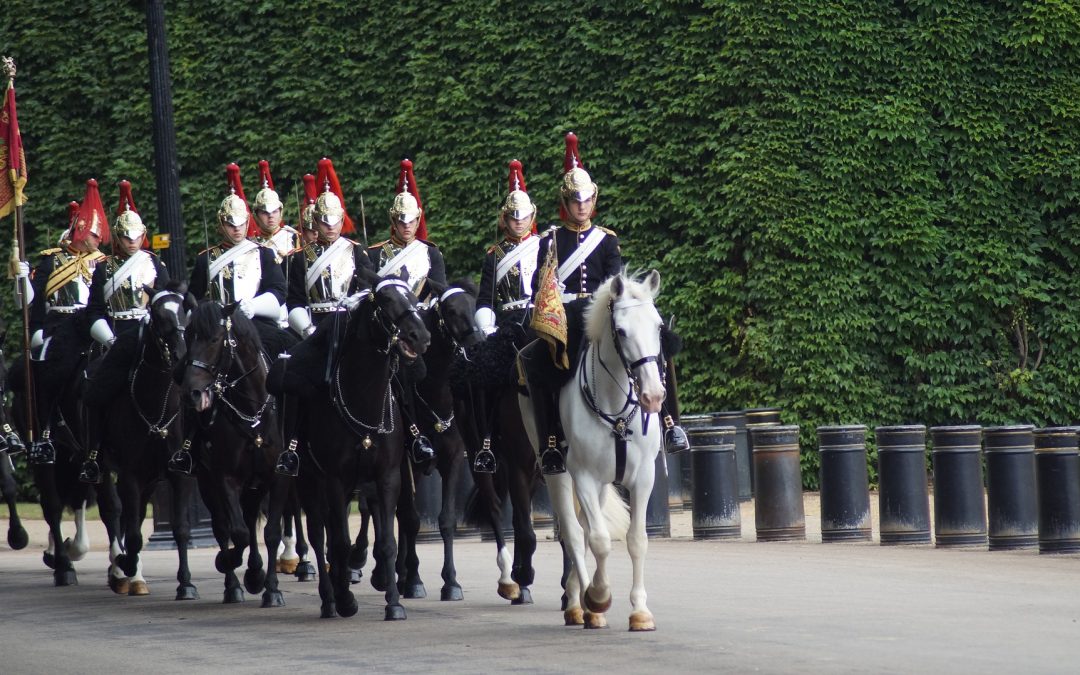 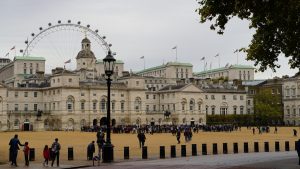 Changing of the Guard in Horse Guard Parade is when the guards change responsibilities and duties around the Royal Palaces. The Old Guards will change with the New Guards also known as Guard Mounting and known as the units or battalion of the Household Divisions. It takes place either outside Buckingham Palace or Horse Guard Parade.

The History of the Changing of the Guards

The guards were once soldiers in the British Army, not just for ceremonial purposes. The Changing of the Guards have been protecting the Sovereign since the 13th Century, so you can imagine that the British monarchy has been the longest reigning monarchy in Europe. Therefore, it’s a must to visit.

The difference between the guards in Horse Guard Parade and the guards in Buckingham Palace is, the one in Buckingham Palace are infantry soldiers also known as Foot soldiers. During the war, they didn’t involve horses, the one in Horse Guard Parade are senior regiments in the British Army, also known as the Household Cavalry, The Lifeguards and the Blues and Royals. They both fought in battles such as the Battle of Waterloo and Afghanistan as well as serving Royal ceremonials such as royal weddings and the Queen’s birthday during the Trooping of the Colour.

Apart from big ceremonies, the Horse Guard Parade is just a large space where people take photos and walk up and down to get to Trafalgar Square in the West End. If you want to know more about the West End, check out my West End Walk for inspiration. I did feel, being in that space gives your mentality a good boost, being in fresh air. The off white, bright space of Horse Guard Parade is probably the size of a football pitch. Click here for more information on the purpose of Horse Guards Parade and other nearby attractions.

My time at The Changing of the Guards Horse guards Parade 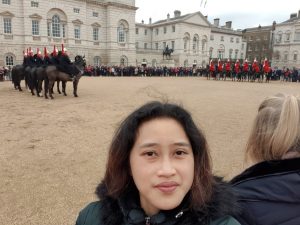 As I headed out towards Whitehall, the wide space on the Whitehall ground was already prepared for their appearance, it was already 10:30 in the morning, there weren’t many people waiting for the guards to come out still. This was good because I could get a good spot. I stood on the left side of the archway where they were going to come out from, but I reckon they’d be facing their backs towards me, so I moved to the other side of the square.

What I love about the Changing of the Guards in Horse Guard Parade is that before the change, there’s an archway where they come out and you’ll end up in Whitehall. In Whitehall, turn left, you’ll be in Trafalgar Square. Click here for more information on Trafalgar Square. Turn right you’ll see Big Ben and Westminster Abbey alongside the River Thames and South Bank. It will only take around 10 minutes to get there. There are so many things you can do in South Bank. Click here for 31 things to do in South Bank London.

I advise getting to the Horse Guard Parade half an hour before it starts since the guards come out at 10:45 am. They gather around House Guard Parade, march through The Mall and past Buckingham Palace and Green Park.

There is a lot of waiting around though. Around fifteen minutes later, I heard a lady ask the gentleman next to me how long the guards were going to stand around for. This showed how many people were bored during the wait.

If you want to see The Changing of the Guards in Buckingham Palace, it starts at 11 in the morning. One hour before the ceremony, you have the chance to admire St. James’ Park, but the Changing of the Guards in Buckingham Palace are crowded, gets hot and cramped so bring water as you’ll get dehydrated. If you miss your spot, that’s it, it’s gone, so be there an hour before it begins. The best viewing position is from the left side of the gate of the main gate.

There are pelicans in St. James’ Park, and if you want to see them head over to the Duck Pond Cottage at feeding time at 2:30 pm. The pelicans do change their positions, one minute there’d be in Duck Pond Village, and the next they’ll be sitting by the lake over the bridge.

Things to do around Horse Guard Parade

Walk a few miles right towards Big Ben and Westminster Abbey. Click here for my time in Westminster Abbey. If you prefer, take the tube or bus towards Westminster tube station. You will also see the London Eye, River Thames, London Dungeon, Sealife Aquarium, and the strip of Southbank. Click for 31 things to do in South Bank London.

Walk through The Mall where major ceremonies are held, especially royal ceremonies.

No matter where I stood, the view of the guards was good because they both faced each other. If you stood on the right side of the circle, you could see the guards facing you on the left, vice versa. If you’ve missed the ceremony, head yourselves over to The Mall where they would go towards Buckingham Palace. Looking around, I noticed passersby taking pictures while they galloped past.

I found that the Changing of the Guards in Horse Guard Parade had no background music or drums unlike the one in Buckingham Palace. They headed out from Whitehall archway into the circle with their horses in silence. The New Guards from afar came towards us passing through The Mall. They seemed to be high on their big horses and approached us in silence too, only the clanking of horse hooves made noise.

Visiting the Changing of the Guards was a memorable experience. Your trip wouldn’t be complete without having seen it face to face. The crowd here wasn’t a negative experience, although there was a lot of people crowding around. The horses were huge, and the guards were tall.

There was a shout from the captain to get ready to stand guard. The ceremony can get a bit boring but as a tourist, having to see British guards in blue and red uniforms on their horses was a sight to see and cannot be missed.

So, all in all, I did feel a little bit bored because I expected more from the Changing of the Guards. I did feel sorry for the horses though because they too felt a little agitated standing around for long periods. They shook their heads up and down and had to gallop in circles to get some exercise.

People think that Changing of the Guards are just guards wearing black and red uniforms but it’s more than that. It’s an iconic British patriotism Brits are proud of. The smiles on the British Police Officers make British culture that extra special. When the police came to patrol, you could even stroke his horse.

After the procession, I started going back to Buckingham Palace through The Mall where they galloped slowly among traffic. I wanted to follow the guards and see where they were going but they passed Buckingham Palace and disappeared. The crowd dispersed and went their separate ways.

I then decided to walk around The Mall to absorb my surrounding when everyone dispersed. In the middle of the Mall, there’s a zebra crossing where you can take a good view of Buckingham Palace. I personally believe that that’s a good spot to take a picture of Buckingham Palace.

I’ve been a resident here for over 27 years now. Watching the Changing of the Guards was a spectacular experience. Their uniform epitomises the British culture, and these guards who happen to serve, protect and guard the Queen has made this experience extra bit special. It’s an icing on the cake when visiting other tourist attractions around London. Don’t take it for granted.