The Ultimate Guide to the British Museum 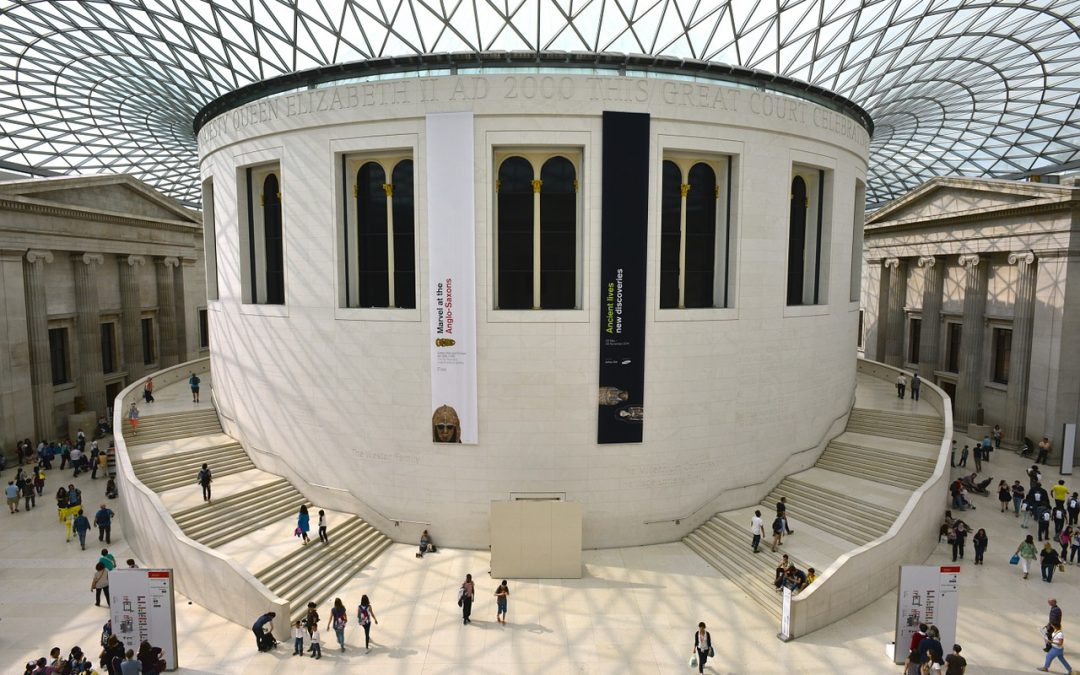 How to make the most of the British Museum

It can be overwhelming to visit the British Museum, so I suggest sparing 1 – 2 hours there. I spent an hour there, and my feet were already tired. In this British Museum guide, you’ll see the most visited objects in the museum, so, organise and plan what it is you want to see within the hour.

If you cover the whole museum, you can get lost. You could spend the rest of your time visiting the other museums and galleries in London, and other free attractions in London. I was also lost myself, however, take your time and enjoy looking at history at its finest. There are assistants standing in every corner waiting for you to ask any questions you want answered.   And yes, you can take photos in the museum and make sure you take the British Museum audio guide in more than 5 languages in your self guided tour, so you don’t miss anything important. 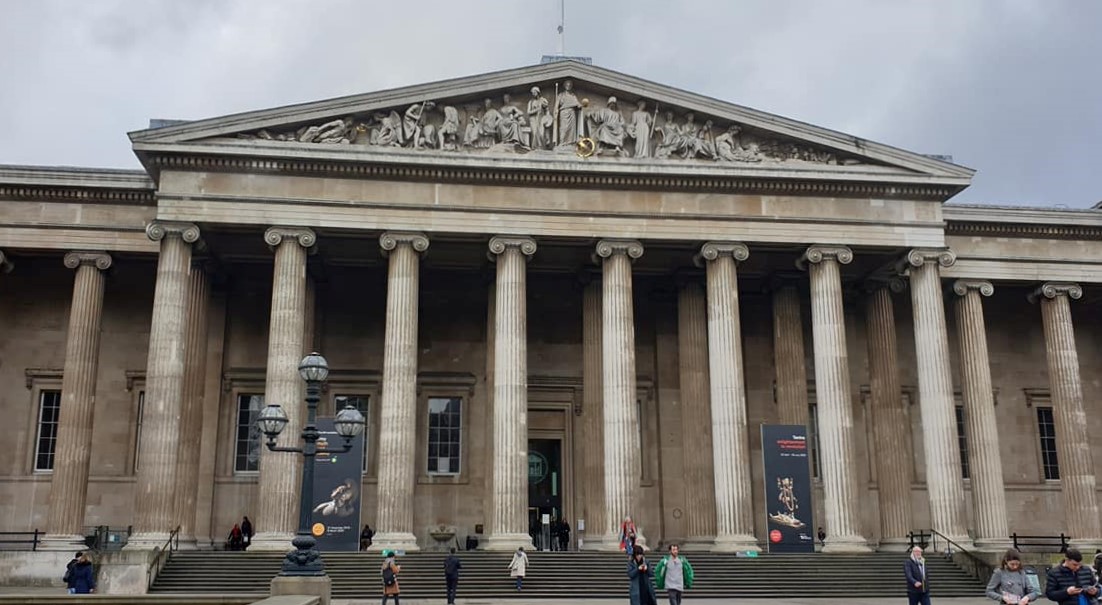 History of the British Museum

The British Museum has been around since 1759, and since it first opened, the Parliament has made it its mission to make the museum free for all. The museum stores more than 6000 treasures and artifacts rich in history and culture from around the world. Archaeologists have been working tirelessly to find hidden objects and it’s not going to stop now.

This British Museum guide will give you 8 collections that are worth seeing. At first, visitors had to buy tickets to visit the museum for a limited time, then throughout the mid-19th Century, visitors had no time limit. With more than 6 million visitors each year, and millions of donations from people around the world, the British Museum became an iconic museum for all to visit.

What are the best things to see at the British Museum?

I’ve researched a lot about what to see in the British Museum. I will be covering 8 treasures that I feel worth looking at. Here are some of my British Museum highlights.

The first item you’ll notice is the Rosetta Stone. The Rosetta Stone has travelled to many places throughout history and it’s been an interesting one. Weighing 760 kilograms, it was discovered in July 1799 by Napoleonic soldiers in Rosetta, what we now call the town of Rashid in Egypt. Academics in the 1800’s worked tirelessly to translate the hieroglyphics on the stone. The Rosetta Stone is not as big and tall as I imagined, but it’s very heavy.

The history of the Rosetta Stone started like this. Temples closed when Egypt converted into Christianity. Some masonries to construct the Egyptian language or hieroglyphs were still in the process. They broke the stone and brought it to Rashid to be made into a fortress by Sultan Qaitbay, the ruler of Egypt back then.

When the Brits defeated the French, the stone was then brought into the museum in 1802 “presented by King George III” and now it’s for us to admire and enjoy.

The History of Winged Bulls from Khorsabad The Parthenon temple was dedicated to Goddess Athena, and the Parthenon sculptures decorated the Parthenon temple in the 5th Century BC. It depicts 50 monumental figures and was wrapped around the whole four squares of the temple. The sculptured images were taken from Greek mythology, and in one, it shows a picture of the Greeks winning a victory against the Centaur and Amazon. This was used as a visual metaphor between Darius and Xerxes during the Persian Wars in 5th Century BCE and showed the ideal life of people living in Athens. The photo you see above is the bust of Pharaoh Ramesses II, also known as Ramesses the Great. The body of Ramesses was lost but archaeologists were able to bring his bust into the museum.

He was the third pharaoh of the 19th Dynasty of Egypt during 1279 – 1213 BCE and his family stepped up into power several decades after King Amenhotep IV ruled Egypt. Alongside his father, he tried to restore the Egyptian power in Asia from the failing ruler Akhenaton, then Tutankhamun thereafter.

His father taught him everything there is to know about becoming king before he succeeds the throne. He had his own harem and followed his father on political campaigns to win fights against their opponents. This way, he would have had experience in kingship and strategies in how to win a war.

I was looking forward to this room knowing that when I think of the British museum, the first thing that comes to mind is looking at the mummies. The room was quite compact and narrow, not what I imagined. The last time I went to the British Museum was when I was 10 on a school trip. I remembered it being open spaced, the mummies were larger, and there were many more objects, but was still nice to see the many mummies.

The first mummy I saw was the mummy of a 17-year-old girl Cleopatra, not to be mistaken for the Egyptian queen who married Marc Anthony. It was thought that her family was very wealthy, and that expensive jewellery were adorning around her body to show how wealthy she was. There are other mummies that have been well preserved from 3000 years ago here.

The Mildenhall Treasures were several Roman treasures found in Mildenhall, Suffolk in 1942. They consist of Roman silverware from spoons, goblets, plates, and platters.

In the video below, you will see several silverwares that contain Greek mythology. Inscriptions of its weight can be found on the bases of these silverware, and the owners used them for social purposes and displayed their wealth in their statuses.

Sutton Hoo was a 6th and 7th-century cemetery. In one cemetery, they had found a large ship burial containing Anglo-Saxon treasures, and when they found the ship, it was an important aspect of English history. Alongside their finds, they found several myths, legends, and factual historical documents rolled into one.

Raewald was the ruler of the East Angles and he wanted to establish Christianity in England, and he was thought to be the person buried in the ship. Sutton Hoo showed me parts of Anglo-Saxon history in England I never knew existed.

The video above shows 78 chess pieces known as Lewis Chessmen. It was discovered in 1831 in the Isle of Lewis, Scotland, hence the name. These medieval 12th Century chess pieces were made from walrus tusks and whale teeth. It was thought they were produced in Norway, and some say they were made in Iceland or the Nordic countries. This reference was made to be believed because the Scottish islands were ruled by Norway at the time.

Spend at most 2 hours in the museum. I suggest using the audio guide to work your way around but, in this post, I chose the most important objects that are worth seeing. Everything is worth seeing, but the ones listed in this post are what people are drawn to the most. As it’s not safe to travel right now, the museum does virtual tours on their website that’s worth seeing.

Most British museum guided tours are free, but the “Around the world in 90 Days is £14 per adults. Click here for more information on guided tours with their volunteers.

Buy the guidebook and map as souvenirs since you can look up most things online.

It can get hot in there so make sure you’re able to take off your cardigan and jumper.

Check back on their website here for future exhibitions and talks.

So, there you have it, 8 things to see in the British Museum. Out of all the 8 free museums and galleries in London, the British Museum was the best one. I took the British Museum for granted, but when I planned all the items I wanted to see; it became easier to spend two hours here, not even half a day. I thought spending half a day was too much for me, which was tiring for me.

The British Museum has been an eye opener for me because there were items I didn’t know existed. Even though I would love to spend all my time here, I didn’t have the time and energy to do so.

After visiting the museum, you can walk 10 minutes to the theatre district where you can watch many West End shows including Les Misérables, Harry Potter and the Cursed Child, and Michael Jackson Thriller the musical. Make sure you visit my West End walk post if you want to explore the attractions after the museum visit. There is a British pub across the road where they serve fish and chips and other traditional British food.

Till next time, and in the meantime, be safe!!!!

Nearby attractions and hidden gems around the British Museum

After the British Museum, there are many attractions you can visit. The West End area is a few minutes’ walk away from the British Museum. Check out my West End Walk for a guide on how to make the most of the attractions there. Alternatively, get on the Piccadilly Line from Russel Square Station to London’s King’s Cross Station in 4 minutes. There are two hidden gems you can visit. If you’re into cemeteries, give the Hardy Tree a visit.

The Hardy Tree consists of hundreds of 18th Century tombstones placed close together around a large ash tree by novelist Sir Thomas Hardy. In the mid-19th Century, London was in the middle of a great railway expansion, which they thought would affect the souls buried in the nearby graveyard.

Sir Thomas Hardy thought it was a good idea to pile the burials near the ash tree so they could rest in peace. However, it’s thought the people buried here aren’t resting in peace to this day. Weeds and algae have grown between the tombstones and people have had bad luck here and the souls resting here would commit an act of “body snatching”. Visit this tree if you’re brave enough, good luck!

Once you’ve given that a visit, you can take a paid photoshoot with the Hogwarts scarves and wand near the Harry Potter’s Platform 9 3/4, and browse the Harry Potter shop in the corner. If you don’t want to pay for the photoshoot, there’s another trolley stuck on the wall where you can take a self-photo. There’s no wand and scarves though, just an old trolley. Euston Station next door is the station to take for the Warner Brothers Harry Potter Studio Tour.

Free attractions in London
Things to do in Greenwich, London
How to make the most of Vapiano Tower Bridge restaurant